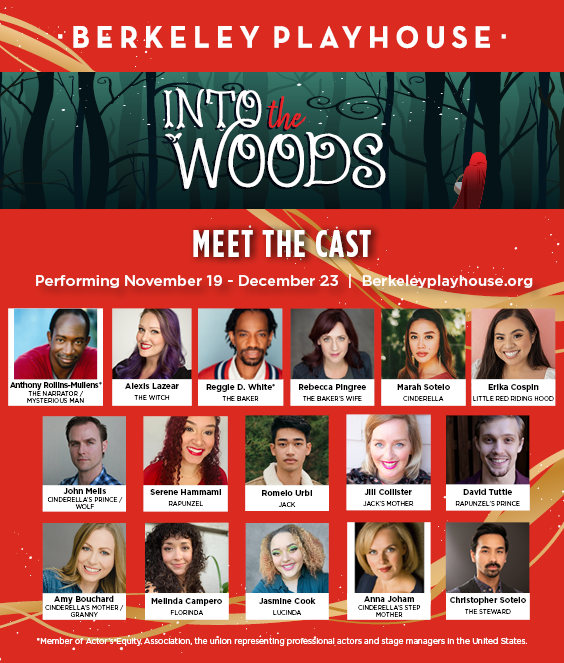 And playing The Giant (voice) is Jessica Coker

SYLVIA CHEN (Keys 2) is honored to be able to share her passion for music in theaters all over the Bay Area, such as Broadway by the Bay, Center Repertory Company, Woodminster Summer Musicals, and San Francisco Playhouse, to name a few. Highlights of her long career playing keyboards include performances with the visiting national tours of Wicked and The Lion King presented by BroadwaySF at the Orpheum Theatre in San Francisco, Triumph of Love with TheatreWorks, and the two-piano orchestration of My Fair Lady at Foothill College. JUSTIN J. SMITH (Trumpet) (he/him) is a freelance musician and the Upper School Music Teacher at the San Francisco Day School. A musical chameleon,  you will find him playing and recording with small-group jazz bands, musical theatre productions, pop/rock bands, orchestras, and classical chamber music ensembles. Justin also is the resident Trumpet Soloist at All Souls Episcopal Parish in Berkeley and Solo Cornet with the NABBA competing San Francisco Brass Band. Justin is excited to return to the Berkeley Playhouse for his ninth production with one of his favorite Stephen Sondheim musicals. LARRY DE LA CRUZ (Reed 1) studied music at the Berklee College of Music, and earned a B.A. degree in Music Education at San Diego State University. He has been playing flute, saxophone, and clarinet in the San Francisco Bay Area for over 25 years in various music groups, and looks forward to his fourth show at the Berkeley Playhouse. AUDREY JACKSON (Reed 2) (she/her) Multi-instrumentalist Audrey Jackson has played for musical theater productions from Napa down to Monterey. She last worked at Berkeley Playhouse on Annie and Urinetown. Other last credits include Sunday in the Park with George, A Christmas Story, Cabaret and Groundhog Day the Musical at SF Playhouse. She is also now a proud part owner of Forrests Music in Berkeley. Her hobbies include cooking and hiking. When not engaged in musical activities, discovering the intricacies of Quickbooks or quarantining, she can be found in New York attending Broadway musicals and Mets games, or relaxing in the Napa Valley with her dearest friends. BRIETTA GREGER (Percussion) is a Bay Area-based percussionist, well versed in all styles and genres of music. With an MFA from CalArts, she specializes in avant-garde chamber music and North Indian classical tabla, but holds a soft spot in her heart for musical theater. She also performs, records, and teaches orchestral, jazz, pop/rock, Afro-Cuban, classical, rudimental, improvisation, and more. Brietta is experienced in performing with dancers, touring, composing, and working with students of all ages. Visit  briettagreger.com  for more. EMANUELA NIKIFOROVA (Violin 1) A native of Bulgaria, she benefitted from the influence of the Russian violin school at Varna and Sofia Middle and High music schools, the lineage of thinking of Carl Flesh, through his pupil, Yfrah Neaman, and Neaman's esteemed student, Professor Kevork Mardirossian (Louisiana State University School of Music), the dedication of Lord Yehudi Menuhin and Argentinian Maestro Alberto Lysy at the International Menuhin Music Academy, Gstaad, and the finesse and brilliance of Camilla Wicks at the San Francisco Conservatory of Music.  Nikiforova has performed on three different continents from a young age as a soloist, chamber and orchestra musician. Nikiforova enjoys making time for private teaching, coaching youth orchestra members and popularizing Bulgarian Classical music as a Music Director of Bay Area Bulgarian Festival Strings. IVY ZHOU (Violin 2) (she/her) is a UC Berkeley graduate and violinist based in San Jose, CA. She has been playing the violin for 20 years under the instruction of Dan Flanagan, William Barbini, and Agnes Perroud. She played as a section violinist for the Apollo Symphony Orchestra and UC Berkeley Symphony Orchestra, and served as the concertmaster and soloist for the Davis Senior High School Symphony Orchestra. She now performs in orchestras, ensembles, and as a soloist in various events in the San Francisco Bay Area alongside her daytime job as a mechanical engineer.

CAMERON PENCE (Production Manager) is in his sixth season as Production Manager at Berkeley Playhouse! Originally from North Carolina, Cameron is happy to call Berkeley Playhouse his artistic home. In addition to production management of all Professional Season shows, Cameron has also served as Lighting Designer for Memphis, West Side Story, and Sister Act. Prior to Berkeley Playhouse, Cameron was Conservatory Technical Director at the American Conservatory Theater. Lighting Design credits at ACT include I’m Still Standing and Punk Rock for the Young Conservatory and The Big Meal and Rocky Horror for the MFA program. Before moving to the Bay Area, Cameron toured the world for six years with a variety of touring shows. In his spare time Cameron enjoys sailing on San Francisco Bay. MICHAEL PATRICK WILES (Casting Director and Resident Music Director) (he/him) is in his eighth season as Casting Director & Resident Musical Director for Berkeley Playhouse. Previous music directing credits for Berkeley Playhouse include Mamma Mia!, Pippin (TBA Nomination), Dreamgirls (TBA Nomination), Grease, Sister Act, Urinetown (TBA Award for Outstanding Music Direction), Avenue Q (TBA Award Nomination), Peter and the Starcatcher, The Addams Family, and Hairspray. Michael has served as musical director on over 80 other productions, including work with Center Repertory Company, San Francisco Shakespeare Festival, Pacific Repertory Theatre, Bay Area Children's Theatre, Contra Costa Civic Theatre, Cornish College of the Arts and the San Francisco Opera Guild. BFA, Cornish College of the Arts. MELISSA RIVERA (Producing Director of Education & MainStage) (she/her) is a Bay Area-born Latina performer, educator, and theater professional. She holds an MM in Opera & Music Theater Performance from Southern Illinois University at Carbondale, and a BM in voice and a BA in Spanish from San Diego State University. She participated in the LAByrinth Theater Company’s intensive ensemble in New York where she studied with Philip Seymour Hoffman (among others), and completed an in-depth teacher training course with Sheri Sanders, creator of Rock the Audition, in pop/rock musical theater audition techniques. Before joining Berkeley Playhouse Melissa performed all over the country in theaters such as Sight & Sound Theatres, Legends in Concert, and Opera Lancaster. She is excited to be a member of this theater community. MARY K. LINS (Managing Director) (she/her) This is Mary’s third season at Berkeley Playhouse. She trained in theater and music at Pennsylvania State University, Harrisburg Arts School, Interlochen Center for the Arts musical theater program, and holds a masters degree in religion and the arts. Prior to relocating to the Bay Area, she served on the board of directors for the Millbrook Playhouse Regional Theater. Mary is especially passionate about the ongoing development of Berkeley Playhouse’s educational outreach programs due to the invaluable tools and life skills children cultivate through introduction and engagement with the arts. KIMBERLY DOOLEY (Executive Artistic Director) (she/her) has been directing, choreographing, teaching theater and working in arts producing and administration in the Bay Area for over 20 years. She is a graduate of NYU's Tisch School of the Arts in the Experimental Theatre Wing. At the Berkeley Playhouse, she has directed and choreographed Once On This Island, Seussical, Mary Poppins, The Wiz, Lucky Duck, The 25th Annual Putnam County Spelling Bee, Addams Family, Beauty and the Beast, Billy Elliot, Grease, and Pippin, as well as several KidStage and TeenStage productions. She's grateful to call this her creative and professional home. ELIZABETH MCKOY (Founding Artistic Director) (she/her) directed many shows for Berkeley Playhouse since founding the company in 2007, including: Peter Pan, Cinderella, Willy Wonka and the Chocolate Factory, The Sound of Music, A Little Princess, and Tarzan. She has also directed over 30 YouthStage shows including Hello, Dolly!, Pirates of Penzance, Zombie Prom, Narnia, Once On This Island, Into the Woods, 13, and more. Elizabeth grew the organization from a small youth theater camp to a thriving musical theater company and youth education program. She has spearheaded the commissioning of eight new musicals, including the acclaimed new musical Bridges, which had its world premiere at Berkeley Playhouse in 2016 and was seen again in New York. Elizabeth is also a proud mama of five amazing children.

Berkeley Playhouse offers one Pay What You Can performance for each of our MainStage productions. This season, patrons can purchase tickets for our Pay What You Can Nights in advance! Seating for this performance is general admission. We suggest a donation of $20, but can accept a minimum of $5. There is a limit of 6 tickets per purchaser. Get your tickets early for this popular Berkeley Playhouse promotion!

Click here for advisory notes and discussion topics about our 2021-22 MainStage Season productions!